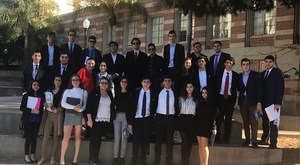 12th Grade Scholar, Nayree Panossian, describes her experience this year as a participating member of Model United nations at UCLA.
Model United Nations, also known as Model UN for short, is an extracurricular activity in which middle and high school students, as well as college students, are introduced to the vast world of negotiation, politics, and diplomacy. These conferences generally last two days, typically over a weekend, and are internationally hosted by colleges or high schools.
A variety of issues are presented in different committees, and students attend as delegates either individually or in a pair representing one country of the United Nations. They work with other students that may have come from other states or countries, and, together, they prepare a draft resolution which resolves the discussed issue that affects our society today.
As an active participant in Model UN for three consecutive years, I have developed and learned several skills during my educational experience there. In the morning, our group of delegates meet before the opening conference, as do all the other delegates from their schools. After checking in, everyone who participates meets in a designated hall on campus for the opening conference where we are introduced to the board members of the university that are involved in Model UN, in my case, it was at UCLA. From there, we are led to rooms where the conferences and debates take place within the smaller committees. From here, the conference officially begins.
We start off by voting for one of two issues to discuss. Later, volunteering to be on the speaker’s list takes place. This is where delegates are typically given one minute to share their ideas for possible solutions to the issue to other delegates as well as the dais, the group of administrators that runs the conference. As I stand up and speak in front of the delegates around my age and present an issue and a possible resolution, I cannot help but imagine myself in an actual conference, believing I can and do have the power to change the world. Although this may seem far-fetched or exaggerated, I can confirm that most of the students participating have this same exact feeling of confidence and self-awareness while speaking to and debating with others. The atmosphere of being involved in an issue greater than us is unimaginable. Listening to other delegates’ speeches and resolutions and commenting on them truly helped develop my sense of communication and literacy. This experience aided me to learn more about our government and its political agenda as well as other countries’ politics.
This recreation of real-life UN committees specifically stimulates research, writing, debating, and speaking skills within each delegate as well as targets and instills leadership and cooperation. As a high school student, I have participated in Model UN for three years and have always been eager for each upcoming conference. It is an amazing experience for middle and high school students to be involved in such an educational yet exciting activity. Not only is it an academic experience where students develop as individuals and become involved in current issues in society, but it is also an enjoyable and thrilling environment where they are able to flourish outside of their comfort zones and form long-lasting connections with new friends. By the end of the day, the greatest thrill of all for most students is knowing they were actively involved in a reality that greatly impacts our world as a whole.
by Nayree Panossian - 12th Grader