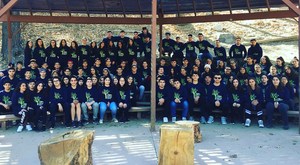 Every year, Freshmen scholars retreat to AYF campgrounds for a weekend of activities that promote leadership and establish a camaraderie between classmates and friends.
In August of every year, the freshman class of Pilibos comes together for the first time to begin their High School journey. This year, the class consists of 81 students who attended a variety of schools in 8th grade including Pilibos, Chamlian, Armenian Sisters Academy, Merdinian, Ivy Bound Academy, Wilson Middle School, Toll Middle School, and Jordan Middle School. During the Fall semester, the ninth grade scholars attend a retreat that focuses on gaining and honing their leadership skills. This is the first time that all 81 of them come together to work as one and accomplish the same goal. Up until this point, they may have been taking different classes and many of them have yet to meet one another. This retreat gives them the chance to form new friendships, learn leadership skills, and become a united freshman class that will continue to grow together as they move toward graduation. On this journey, members of the senior class serve as counselors and lead by example.

by Lale Kacharian
AYF Camp has always been a place to connect with nature, your culture, and to make new friends, who will be by your side for a lifetime. That is why the Pilibos ninth grade retreat was one to remember. The entire ninth grade class was able to finally fully meet one another, and make some unforgettable memories, while learning about our heritage, and especially have a blast while doing it.
On the way to the campsite, I did not know what to expect from the retreat, and I became a little nervous and intimidated, because I did not know most of the people in my grade, and I had never really interacted with the seniors around school. But, once we reached camp, and got situated in our cabins, I knew that I was going to have one of the most exciting and memorable trips. I was able to create stronger bonds with my classmates, especially when we were all around the campfire, singing Armenian songs at night and roasting marshmallows. That made me realize, that I should appreciate every single moment I have with my new classmates, because time will fly by.
As the weekend went by, we split up into three teams of red, blue, and orange, and we played a lighthearted, but competitive game of “steal the bacon”. We were also challenged to go on a scavenger hunt, where we split up into even smaller groups, and where I had the chance to be the team’s leader. It was truly such an exhilarating activity, because we put so much energy and effort into trying to win, and although we did not, I learned so many amazing qualities from just being on a team and working together for the same end goal. I personally gained knowledge on how to be a fair and focused leader, to be able to finish what our goal was for the scavenger hunt. And at the end of the day, the quote, “Great leaders inspire greatness in others,” came to my mind and I definitely took in as much as I could from the opportunity.
Even after all of these really fun activities, one really important aspect of the retreat stood out to me the most. In my head, it was only four words that stated, “We are all Armenian.” It was so powerful to me that even after 2000 years of history, Armenian students, from an Armenian school, were able to experience something so inspiring like the Freshman Leadership Retreat. It made me appreciate where I come from, and it inspired me to continue to keep my heritage alive.
All in all, the Freshman Leadership Retreat allowed me to gain knowledge about myself, and ask questions I should be asking myself as an Armenian young adult. I was able to learn so many leadership skills, which at the end, taught me how to work in a team. With the midnight talks in the cabin, to the warm campfire in the cold, and to the mediation at the top of the mountain, I am certain to say that this retreat was one of the most memorable and empowering retreats of my life, and I know that I am going to use the new gained skills and cherish the newly formed friendships throughout the course of my life.

Freshman Leadership Retreat through the eyes of a Senior Counselor

by Elita Minas
The Freshman Leadership Retreat was a weekend to remember. It was an amazing opportunity and an incredible experience for both the freshman students and the senior counselors. Within these three days, significant growth and development was observed. It began with the freshman walking into camp on the first day, in their own groups. A strong bond and connection between everyone was yet to be developed. However, the next three days showed a drastic change from the first day that they arrived at the camp until the last day when they left. As senior counselors, we saw each and every freshman express their individuality in many diverse ways. We got to see how throughout the weekend they began to connect and form bonds with one another. Starting from the unforgettable memories made in the cabins to the scavenger hunt, each individual flourished as a person and associated with one another building strong connections. The students learned how to be leaders, take charge of the situation, and how to lead their peers when it was necessary. They developed a foundation of leadership skills that will be an essential in the next four years of high school and beyond and that will guide them to the right path, opening new doors of opportunities for them. Toward the end of the trip, we perceived how the freshman had begun to form bonds with one another as a grade and how the ice had begun to thaw! They began conversing with students that they did not usually chat with while diminishing the distance that was in between them when they first arrived. This retreat taught them to be strong, confident and determined individuals. Not only did they acquire these amazing qualities, which are going to be crucial during their time in high school, but also it aided them in constructing a relationship between the class and among one another.
This retreat helped me mature as a senior because it taught me true responsibility, watching over the freshman like they were my own younger sisters and brothers. It also helped me grow as a leader because it made me take charge and lead the freshman on the right path. I became more aware of how fast time flies, realizing that I was in their position just 4 years ago and how every moment should be taken in because with a blink of an eye you will be a Senior, ready to graduate from high school. This realization helped me grow by guiding me to not take things for granted and making every moment worthwhile. This retreat was an astonishing experience that we will all cherish for many years to come.